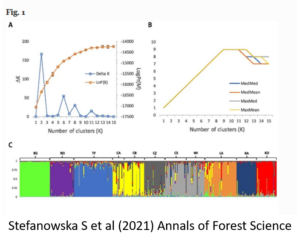 Taxus baccata remnants established recently tend to contribute less to the species’ overall genetic variation than historical populations because they are subjected to a greater impact of the founder effect and genetic isolation. As tree trunk perimeter is a rough indicator of genetic variation in a population, this measure should be considered in conservation programs.

For the read-only version of the full text:
https://rdcu.be/cqL5t

Data availability
Microsatellite data generated in this study are available publicly at https://doi.org/10.5281/zenodo.4153442