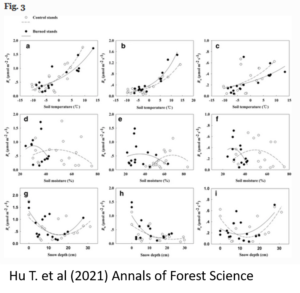 Context Intensifying forest fire regimes are likely to influence future C budgets of forest ecosystems. However, the mechanism of fire disturbance on the components of non-growing season soil respiration rate (Rs) and its environmental factors are not fully understood, creating uncertainties for future C sink estimates under climate change scenarios.
Aims This study examined the effects of recent fire on non-growing season (November 2017 to April 2018) Rs, its heterotrophic (Rh) and autotrophic (Ra) components, and Q10 in a cold temperate forest in northeast China.
Methods Soil CO2 effluxes (including Rh and Ra) were measured using an Li-8100 portable automatic measuring system for soil C flux (Li-Cor, Inc.; Lincoln, NE, USA). Soil temperature and moisture were measured using a temperature probe (Licor p/n8100–201) and soil volumetric water content probe (ECH20 167 EC-5; p/n 8,100,202), respectively, at a depth of 5 cm; snowpack depth was measured with a ruler.
Results During the non-growing season, fire significantly increased the Rh by approximately 47% in burned stands. The Q10 of Rh significantly increased from 2.39 in the unburned stands to 3.12 in the burned stands. An interaction between soil temperature and snowpack depth was the driving environmental factor controlling the non-growing season soil respiration and its components after fire disturbance.
Conclusion Fire is a potent factor on the components of the soil respiration and should not be ignored in forest ecosystem C cycling, especially during the non-growing season as it is vulnerable to micro-environmental variation. Long-term studies involving diverse ecosystems are required to better elucidate mechanisms that have been found during the non-growing season Rs under an increasing trend of fire occurrence.

For the read-only version of the full text:
https://rdcu.be/cixIP

Data availability
The datasets generated and/or analyzed during the current study are available in the Zenodo repository, https://doi.org/10.5281/zenodo.4549901