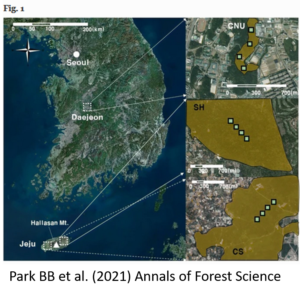 Local climate exerted a stronger effect on leaf litter decomposition of deciduous Quercus acutissima Carruth. and evergreen Quercus glauca Thunb. than initial leaf litter quality: the decomposition was much faster for leaves of the two species in warm-temperate forest than in the cool-temperate one.

Context Litter decomposition mainly depends on initial litter quality (e.g., physical features and nutrient content). However, the effects of litter quality on decomposition remain inconclusive in different climatic zones due to complex interaction with climatic factors.
Aims This study investigated the effect of litter quality and climatic factors on litter decomposition of deciduous Quercus acutissima Carruth. and evergreen Quercus glauca Thunb. in warm-temperate forests in Jeju Island (Cheongsu; Seonheul) and cool-temperate forest at Chungnam National University Experimental Forest (CNU).
Methods Through an inter-site experiment and litterbag technique, variations in remaining mass and decomposition coefficients (k) were measured from the two Quercus species in Korea.
Results The initial mass loss was rapid during the wettest months in summer season. Annual k varied significantly by site: Seonheul (0.77 year−1 ± 0.03) > Cheongsu (0.62 year−1 ± 0.02) > CNU (0.42 year−1 ± 0.01). Leaf litter decomposition was similar for the two species in the warm-temperate sites and 36% higher in the deciduous species in the cool-temperate site. Based on the principal component analysis, overall k values were strongly correlated (rho = 0.55–0.60) with climatic factors, and no significant correlation was detected in leaf litter quality.
Conclusion In conclusion, our results highlighted that the climatic condition in the study sites predominantly controlled the litter decomposition of the deciduous and evergreen oak species, with nevertheless an interspecific difference in the coolest site.

For the read-only version of the full text:
https://rdcu.be/cijJB

Data availability
The datasets generated during and/or analyzed during the current study are available in the Harvard Dataverse repository (https://doi.org/10.7910/DVN/2VDERV) and also from the corresponding author on reasonable request.