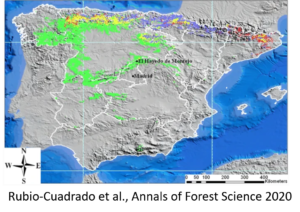 In recent decades, there has been a decline in growth in a rear-edge broadleaf forest of Fagus sylvatica, Quercus petraea, and Quercus pyrenaica. Although temperatures have been rising due to climate change, the observed decline in growth was mainly attributed to increased density and competition between trees since the cessation of traditional uses such as logging in the 1960s.

Context In recent decades, two major factors have influenced tree growth in many forests: climate warming, which is associated with aridification and negative growth trends in many Mediterranean forests, and abandonment of forest management, resulting from forest policy in conjunction with rural depopulation in Europe, often leading to an increase in competition and a decrease in growth.
Aims Here, we study the growth trends in a mixed forest of Fagus sylvatica, Quercus petraea, and Quercus pyrenaica, where the abandonment of traditional uses in the 1960s has been followed by an increase in tree density. In this forest, both F. sylvatica and Q. petraea reach their south-westernmost limits of distribution.
Methods Using dendrochronological methods and growth modeling, we assess the importance of climate warming on the shifts in competitive growth advantage of these three coexisting tree species and the relative importance of climate and competition on growth trends.
Results Q. petraea and especially F. sylvatica showed a favorable evolution of their competitive capacity, despite the increase in temperatures that has occurred in the area in recent decades. F. sylvatica presented the lowest sensitivity to climate.
Conclusion Under the current climate and forest structure conditions, competition is the most limiting factor on tree growth for the two oak species.

For the read-only version of the full text:
https://rdcu.be/b7ZE4

Data availability
The datasets generated and/or analyzed during the current study are available in the e-cienciaDatos repository, https://doi.org/10.21950/VEQWPI