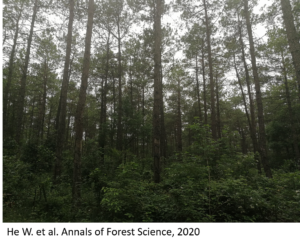 The mixture of decomposing litter from three predominant tree species in a Masson pine ( Pinus massoniana Lamb.) forest showed advantages in elemental cycling, and the species component identities were found to be an important driver for the release of several metallic elements.

Context Although mixed forests have long been considered essential to sustainable forestry management, little information is available regarding the effects of the mixed planting of predominant afforestation species on several metallic elements during litter decomposition in the Three Gorges Reservoir region, China.
Aims The objectives of this study were to investigate the potential nonadditive effects on element loss from decomposing litter and to estimate the relationship between the mixing effect and the change in litter quality with environmental hydrothermal dynamics.
Methods Treatments with one, two, or three species of pine, oak (Quercus variabilis Bl.) and cypress (Cupressus funebris Endl.) based on equal litter mass proportions were used in a field litter bag experiment, and the release of potassium, calcium, magnesium, manganese, iron, copper, zinc, and sodium was measured.
Results Over the 360-day incubation period, most elements decayed faster in oak litter than in the other single-species treatments. A comparison of the litter mixtures revealed that most elements displayed their slowest decay in the pine+cypress combination, whereas the decay values obtained with the cypress+oak or pine+oak combinations were generally greater than those obtained with the pine+cypress+oak combination. Increases in the nonadditive effect on the release of metallic elements, with the exception of calcium, magnesium, and copper, were found in the different phases compared with the incubation time. Changes in elemental traits and environmental hydrothermal dynamics can regulate mixing effects on elemental decay in litter mixtures.
Conclusion The mixing of the studied tree species can alter elemental cycling in plantations, and mixed planting with oak appears to strengthen the cycling process.

For the read-only version of the full text:
https://rdcu.be/b4lsm

Data availability
The datasets generated and/or analyzed during the current study are available in the Figshare repository, https://doi.org/10.6084/m9.figshare.12058656.v2