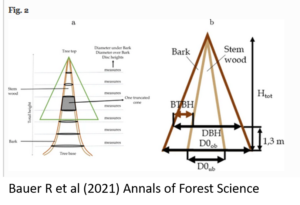 Context The growing demand for wood energy and bio-molecules requires a thorough evaluation of forest biomass, particularly bark.
Aims The objective of this study is to have statistical models of bark volumes for the six main forest species present in North-Eastern France and to be able to estimate regional bark biomasses and quantities of chemical extractives at regional scale.
Methods A large databank gathering bark thickness measured at different heights in France was used for selecting literature or new alternative models of tree bark volume. These models were applied to the available forest inventory data from North-Eastern France to estimate the regional bark volume. Secondly, by multiplying these volumes by basic density data and extractive content recently obtained, bark biomasses and extractives quantities were deduced.
Results The first results consist in a set of species-specific models of bark thickness at breast height with R2 around 0.70 and a relative RMSE around 30% which is an improvement of 0.1 for R2 and of 1–2% for relative RMSE depending on the species compared to the best models from the literature. The second results consist in a set of species-specific models of tree bark volumes with R2 of 0.90 and a relative RMSE which varies between 22% when bark thickness at breast height is included and 40% when it is predicted. A significant relationship between bark thickness at breast height and altitude was also observed. The bark resources of Grand Est and Bourgogne-Franche-Comté regions were estimated at 558 000 m3/year and 611 000 m3/year respectively representing between 5.5% and 15% of the stem volume depending on the species. The propagation of the measurement error of bark gauge was estimated at 5% for model of bark thickness at breast height and 24% for bark volume model.
Conclusion These results constitute an important contribution for a better knowledge of the bark resource at a regional scale and may help to optimise bark valuation by the forest-wood sector.

For the read-only version of the full text:
https://rdcu.be/cEwKf

Data and/or Code availability
The datasets generated during and/or analysed during the current study are available from the corresponding author on reasonable request.