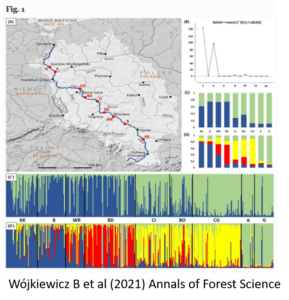 The genetic resources of black poplar in the Oder River valley are still substantial compared to those reported for rivers in Western Europe. On the other hand, clear signals of isolation by distance and genetic erosion reflected in small effective population sizes and high spatial genetic structure of the analyzed populations were detected. Based on these findings, we recommend the in situ and ex situ conservation strategies for conserving and restoring the genetic resources of black poplar populations in this strongly transformed by human river valley ecosystem.

Context Black poplar (Populus nigra L.) is a keystone species of European riparian ecosystems that has been negatively impacted by riverside urbanization for centuries. Consequently, it has become an endangered tree species in many European countries. The establishment of a suitable rescue plan of the remaining black poplar forest stands requires a preliminary knowledge about the distribution of genetic variation among species populations. However, for some parts of the P. nigra distribution in Europe, the genetic resources and demographic history remain poorly recognized.
Aims Here, we present the first study on identifying and characterizing the genetic resources of black poplar from the Oder valley in Poland. This study (1) assessed the genetic variability and effective population size of populations and (2) examined whether gene flow is limited by distance or there is a single migrant pool along the studied river system.
Methods A total of 582 poplar trees derived from nine black poplar populations were investigated with nuclear microsatellite markers.
Results (1) The allelic richness and heterozygosity level were high and comparable between populations. (2) The genetic structure of the studied poplar stands was not homogenous. (3) The signatures of past bottlenecks were detected.
Conclusion Our study (1) provides evidence for genetic substructuring of natural black poplar populations from the studied river catchment, which is not a frequent phenomenon reported for this species in Europe, and (2) indicates which poplar stands may serve as new genetic conservation units (GCUs) of this species in Europe.

For the read-only version of the full text:
https://rdcu.be/cixDZ

Data availability
The datasets analyzed during the current study are available online https://doi.org/10.18150/EIGSVA