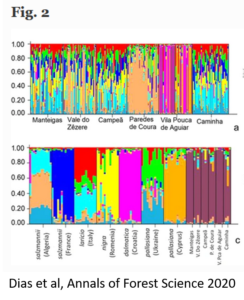 Context Many of the European Pinus nigra J.F. Arnold forests were planted with the material of unknown origin. Efforts have been made to determine their provenances and infraspecific taxonomy regarding their relevance for defining strategies of genetic resources conservation, germplasm use, forest management and genetic improvement. The Portuguese P. nigra populations are allochthonous, and their provenance and infraspecific taxonomy are unknown.
Aims With this work, we intended to characterise the Portuguese P. nigra populations regarding its genetic diversity, structure and relationships using simple sequence repeat (SSR) markers and/or to infer about its origin and infraspecific taxonomy by comparing the SSR patterns of foreign P. nigra samples of known taxonomic classification.
Methods A total of 224 Portuguese P. nigra individuals from six populations were characterised using 14 SSR markers developed specifically to different Pinus sp., including P. nigra, by other authors.
Results Thirteen SSR loci were selected and showed 100% of polymorphism among individuals. The genetic diversity was higher within (95%) rather than among (5%) populations. The Portuguese individuals were structured into two main clusters (K = 2) with low genetic differentiation (FST = 0.04), and the foreign samples were genetically distant from the Portuguese individuals.
Conclusion The six Portuguese P. nigra populations revealed high genetic diversity and seemed to be structured into two main clusters with low differentiation suggesting two provenances or infraspecific taxa. Nonetheless, the comparative analyses with foreign samples did not allow a clear inference about its origin and/or infraspecific taxonomy. Additional foreign samples and/or molecular markers will be tested to pursue these goals.

For the read-only version of the full text:
https://rdcu.be/b47UD

Data availability
The datasets generated during and/or analysed during the current study are available in the Figshare repository (https://doi.org/10.6084/m9.figshare.11344271.v5)