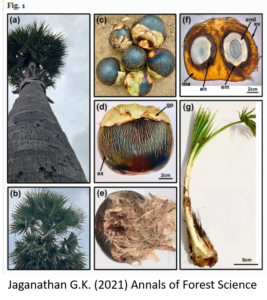 Mechanisms controlling germination of > 2600 Arecaceae species adapted to the tropical forests are not clearly understood. This contribution underpins the notion that the coexistence of dormancy and desiccation sensitivity in some Arecaceae species could significantly affect the germination ecology. Although the evolutionary and ecological significance behind this occurrence is unknown, these traits together could limit the germination from inappropriate depths and allow dispersal.

Context Dormancy and desiccation sensitivity, i.e., recalcitrance, are considered as mutually exclusive traits that evolved to maximize seed survival after dispersal; the former by allowing seeds to spread germination risk temporally then synchronize germination with a favorable growing season, and the latter by allowing germination immediately. However, a few species from temperate ecosystems have been known to produce seeds that are both dormant and desiccation-sensitive, but little is known about such a relationship in the tropical forests.
Aims To understand if desiccation sensitivity and dormancy can coexist in Arecaceae species, distributed predominantly in the tropical forests, and compare the seed traits found in Arecaceae species with other desiccation-sensitive species.
Methods Information published in international peer-reviewed journals was reviewed and a database with records on seed dormancy and desiccation sensitivity was created and discussed.
Results This literature survey has identified diaspores of 34 Arecaceae species that have both desiccation-sensitivity and an underdeveloped, small embryo, i.e., morphophysiological dormancy or morphological dormancy. In Arecaceae species, desiccation-sensitivity is neither confined to large-sized diaspores, nor all species adapted to dry ecosystems disperse diaspore during the wet-season; features reported to be prevalent in desiccation-sensitive species of other families. Endocarp is proposed to act as a mechanical barrier preventing water loss and also offer protection against physical damage; however, the extent of protection against water loss from internal structures is contentious.
Conclusion The possible ecological significance of this unique relationship noted in Arecaceae is currently unknown, and this review puts forward “testable” hypotheses that call for more studies on germination ecology focusing on dispersal and burial.

For the read-only version of the full text:
https://rdcu.be/ceiY4