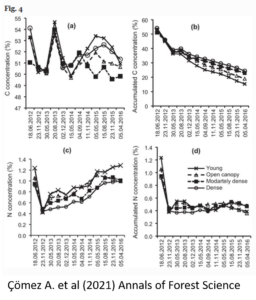 Canopy closure and stand age significantly affected the litter decomposition. Therefore, stand-specific decomposition constants (k) should be calculated in forest carbon models for more accurate carbon budget estimation. Furthermore, to reduce the carbon release from decomposing litter, regeneration cutting should be carried out at later ages, and heavy thinning should not be implemented in mature as well as overmature stands.

Context Decomposition of litter has an important role in primary production with its influence on nutrient release for plant uptake and carbon flux in forest ecosystems. Thus, understanding the effects of the intervention on litter decomposition is crucial for carbon management in forestry.
Aims The effects of stand structure and exposure on litter decomposition rate in Pinus sylvestris stands were investigated.
Methods Samples were taken from young to overmature stands with open to dense canopy. The litterbag method was used to measure the mass loss of the litter. The k values were calculated from the mass loss of decaying litter. Carbon and nitrogen contents of the litter were determined.
Results Cutting caused the decomposition to accelerate at a rate of up to 58% depending on its intensity. The k values were found to fluctuate over time from 0.189 in moderately dense-canopied stands to 0.317 in open-canopied overmature stands. Stand basal area, incubation time, and remaining carbon concentration of the litter accounted for 75% of the variation in the k value.
Conclusion Changes in the stand structure affect the litter decomposition rate in forest ecosystems. Heavy thinning can alter the litter decomposition process drastically, while moderate thinning may not have a clear effect in the long run.

For the read-only version of the full text:
https://rdcu.be/cfSIP

Data availability
The data that support the findings of this study are available from the Turkish General Directorate of Forestry, but restrictions apply to the availability of these data, which were used under license for the current study, and so are not publicly available. Data are however available from the authors upon reasonable request and with permission of the Turkish General Directorate of Forestry.